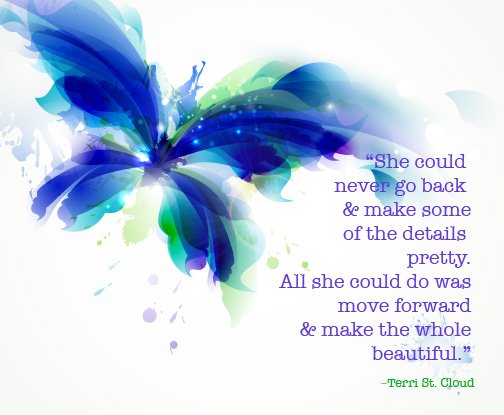 She could never go back

Once upon a time, there was a girl who fell in love. She thought he was the one, even though sometimes a little voice inside her told her that there was something not quite right about him. She said yes when he asked her to marry him, not knowing that the lies had started before the ring was even slipped onto her finger. She spent years being told his lies were her fault. If only you had . . . , if only you would . . ., if only you could be . . . . She heard it so much that she started to believe it.

I often wish there was a reset button. Infinite do-overs until I got it right. Probably most of us feel that way. You already know this but it bears repeating (because, sigh, sometimes we forget): you can’t ever go back and change any of the things you did or didn’t do; you can’t change the things that happened or didn’t happen to you. You can’t go back to that one moment (or maybe it was moments) that changed the trajectory of your life forever, or so you tell yourself, and make a different (and of course, you think, better) choice.

You can’t go back and say yes when that opportunity came. You can’t go back to stand up tall and full of courage instead of what you did, which was back down in fear. Or maybe your past was so much better than your life now, or so you’ve convinced yourself, and all you want to do is go back to the way life used to be. Sadly, you can’t do that either. I know that, intellectually, you understand all this. Emotionally, though, maybe you’re holding out hope that somehow, if only you could go back, you could make it all different.

& make some of the details pretty.

Once upon a time, there was a girl in the backseat of a car with a boy when the condom broke. He said he would love her forever, but when the test came back positive, two little pink lines and pregnant, he wouldn’t return her calls, wouldn’t answer the door when she came by, wouldn’t speak to her at all. She went to the clinic alone and held the nurse’s hand and tried not to cry but cried anyway as the doctor scraped the fetus out of her.

Here is something that I promise you is true: your past doesn’t define you unless you let it. (Yes, I say this kindly, that’s a choice that is squarely up to you.) What happened to you doesn’t define you. What you allowed doesn’t define you. Your mistakes and failures don’t define you. What you choose to do about all of those things afterward is the only thing that defines you. Do you learn and grow? Do you accept responsibility or assign blame? Do you use events/mistakes as fuel to propel you forward to a better and more meaningful life? Do you use happenings/failures as an excuse to accept defeat and quit? Do you choose self-punishment or self-compassion?

(A side note: choose self-compassion every single time, it’s the only thing that’ll heal you). Sometimes, the choices are hard. Sometimes, they throw you clean out of your comfort zone and make you feel like you’re walking a tightrope without a net. Sometimes, they make you tremble or scream or cry or brace yourself for the onslaught you believe is coming. Sometimes, it may take everything inside you not to sprint in the opposite direction of the choice(s) you know you need to make.

All she could do was

Once upon a time, there was a girl who’d been raped. She binged in a frenzy, tearing through the pantry, eating anything she could find. She didn’t care how much her stomach ached or how guilty and ashamed she would feel later. All she cared about, in that moment, was stopping the memory of the attack and the pain that came with it. All she wanted to do was make herself a flesh cocoon, fat that would hide her and protect her so it would never happen again, fat that would make her feel safe.

If you’ve been hanging onto the ugly details of your life, if you’ve been beating yourself up over them, if you’ve been reliving them in your mind and trying give them some kind of shine to make them prettier, you’ve got two choices.

Easier to say than to do sometimes, I know, but those are your only two choices. Number One traps you in a time that’s already over and will be over forever. Number One leads to you withering and dying (maybe slow, but that’s what’s happening). Number Two opens you up for new things to flow into your life. Number Two leads to growth and vitality (sometimes painful, sure, but I promise you, worth it in the end).

Once upon a time, there was a girl who had a dream, tucked in her ribcage right against her heart. She was afraid of risk, afraid of what might happen if she stepped out to pursue it, afraid of failure. But she did step out, telling herself to have faith, walking in the direction her heart told her to go. She put all her hopes on the line. And she failed. Publicly. Humiliatingly. That failure hurt so badly that the next time opportunity came knocking, she shook her head and whispered no and shut the door.

The most disempowering thing you can do to yourself is to live in the past. Right now, this moment, is the only place where you have the power to change anything. And, I promise you, change is the only way you’re going to get out of the funk you’re in.

Show of hands: who likes change? I bet there’s not a single hand in the air. (Mine isn’t raised either, by the way.) Change is scary, I get it. Sometimes, it’s downright terrifying. But there’s no one else coming to fix your life. There’s just you. The good news is that you’re strong and capable and amazing and powerful and talented and you have what it takes to save your own life. You might not believe that right now about yourself, but I know it’s true. I know it is. I believe it enough for both of us.

You can fix the mess you think you’ve made of your life, you can move forward, you can let the happenings and the failures in your life be the lessons that make you into the empowered person you want to be.

Once upon a time, there was a girl who was bullied because she was poor. She had one pair of jeans and two shirts, one yellow and the other white. She often smelled faintly of her mother’s cigarettes, of old newspaper, of wet dog. She moved through her days with her head hung low. One of the upperclassmen, a popular boy, would follow behind her in the school hallway, barking. The other kids would circle around and laugh. No one would help her because they didn’t like her. She wouldn’t defend herself because she didn’t much like herself either.

The first step is to change the story you tell yourself about your past. If there’s one thing I’ve learned after all these years, it’s that you will live out what you believe (about the situation you’re in, about yourself, about your chances, about your ability to succeed, and the list goes on and on). That moment that you tell yourself was a life-crushing mistake, what if it was just an error in judgment? Or maybe a decision made in fear or arrogance? Or perhaps it was simply because you didn’t know better and so you didn’t do better? That’s all.

What about that horrible thing that happened to you that you say marked you and made you who you are today? What if it was there to show you how determined you are, how much perseverance you have, how you are so much stronger than whatever it was that tried to defeat you? What if it happened to teach you compassion or forgiveness or generosity or leniency (toward others, yes, but also toward yourself)?

The great news is that it’s your own voice in your head, so all you need to do is simply edit what it’s saying. I promise you that when you change the story you tell yourself, when you choose to describe events/mistakes in a different light, you’ll begin to accept the ugly details of your history. When you do that, you’ll come to see that you really can move forward and make the whole of your life beautiful.

8 thoughts on “Why You Need To Make The Whole Beautiful”