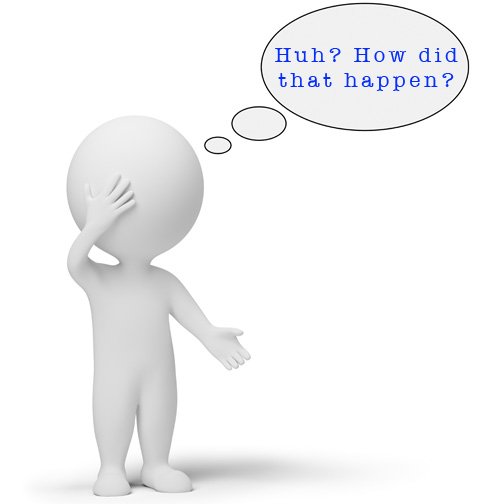 Just how did you end up where you don’t want to be? How come you keep doing things you tell yourself you don’t want to do? Or always seem to get this close to getting something you desperately want only to make a bad choice that makes everything fall apart? Or work really hard to get your life where you want it to be only to do something that wrecks the whole plan? Or maybe you’re on the flip side and you can’t even manage to get started? Just what the &^%$#! is going on?

The answer is your subconscious is running the show

Well, your subconscious provided the roadmap, you just followed it. You may tell yourself consciously that you deserve happiness and you are worthwhile and you want to be rich and you really are likable and on the list goes. But, if, deep down in your subconscious, you actually believe that you aren’t worthy and so don’t deserve to be happy or earn an extraordinary living or have fulfilling relationships because people just don’t like you, well it’s those beliefs, I promise you, that you’ll live out in your daily life.

But why is your subconscious running the show?

A while back, I was lucky enough to hear a neurobiologist speak in layman’s terms. Here’s my understanding of what she said: your brain performs some 400 billion (that’s billion with a b) actions per second (yes, per second). And little old you, well, you’re only aware of about 2,000 of those actions. That’s a measly .000000005%. What does that mean for you? It means the vast majority of the time, you’re not even aware of what’s going on in your own brain. It’s all happening subconsciously. All that to explain that your subconscious is a powerful force in your daily life. It’s so powerful that you will sabotage yourself just to reinforce the beliefs you hold there.

Well, how did that happen?

The beliefs you hold subconsciously got formed by a variety of factors, many of them out of your control. Your upbringing. What you were taught about subjects like: religion, money, sex, marriage, career. What you decided your place in the world should be. The way you were/are treated by others. The way you treat yourself. And the list goes on and on. Here’s what they all have in common: all those thoughts/actions/words/teachings/etc. were repeated over and over until they lodged into your subconscious where you didn’t even have to think about them anymore. Until they got to the point where you just believed: well, that’s just the way things are.

So now what do you do because your subconscious is running the show?

Well, you’re not actually aware of the beliefs you hold in you subconscious most of the time, not unless you start digging to find out. That’s why you need to do an honest inventory of your own mind. What do you really believe deep down at the core of you? What are the beliefs that you probably don’t admit to anyone, including yourself?

A partial list of what I consciously told myself:

A partial list of beliefs I held in my subconscious:

The vast majority of subconscious beliefs that I held about myself came in the second person: you. Why does that matter? Because it was someone else’s voice in my head. Things said to me or actions done to me, some of them recent and some of them from a really long time ago, that I replayed so much in my mind that they became my beliefs about my own self.

Keep that in mind

Pay attention to just whose voice is in your head when you write a list of your subconscious beliefs: Who are you letting rent space in your head? Why? Do you believe they’re right? What if those people (even if you loved them) acted terribly because they were simply misguided and probably deeply wounded themselves? What if they just felt bad about themselves, maybe even hated themselves, and projected all that hate right onto you? If that’s true (which is quite likely), well then all those things you’ve been believing about yourself for so long (or maybe not so long) are complete and utter lies.

Time to take some action:

Sorry to say, thinking positive and having good intentions won’t cut it. As any kid on Christmas morning can tell you, doing something matters much more than talking about it. (Would you rather have the bicycle under the tree or just talk about it being there?) The only way I know of to get moving in the direction you tell yourself you want it to go is to get your beliefs and your actions to line up. So if you tell yourself you’re worthy of having nice things, then you need to go out and buy yourself nice things. If you tell yourself you deserve to have your dream job, then you need to take steps, right now and daily, toward getting that job. See what I mean? Your new beliefs and what you’re actually doing need to both be headed in the same direction.

So make yourself a new roadmap

It’s been my experience that until you address the subconscious beliefs that are guiding you, you’ll likely keep sabotaging all your own efforts. You’re likely to keep finding yourself where you don’t want to be. A wrong map won’t get you to the right destination. Neither will the wrong beliefs. I promise you that’s true. So do yourself a kindness and find out what you really believe. Then change your beliefs to ones that serve you better. Draw yourself a new roadmap. Let your subconscious follow that instead.