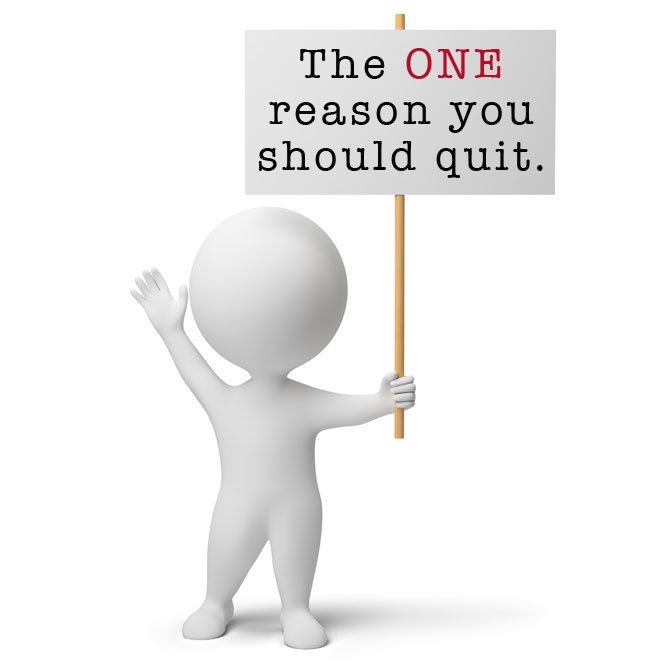 A lot of us have been told to never give up, to never quit, to keep on carrying on no matter what. Usually that advice comes from others trying to encourage you. They may be well-meaning. They may have some stake in the outcome. They may also have their own motives for telling you that, which don’t have a whole lot to do with you personally.

If you follow that advice no matter what, you may find yourself days/weeks/years/decades later wondering what the heck happened to your life and how you ended up so far from who/where you wanted to be.

Sometimes, you really do need to give up. This post is about giving yourself permission to do so.

The one reason you should actually quit

If you find yourself on a path you just don’t want to be on, you need to quit following it.

If whatever path you’re on doesn’t matter deeply to you, you will never be fully invested in the outcome. You’ll also never be happy with the outcome because it wasn’t what you truly wanted in the first place. I’d also argue that you won’t find a whole lot of joy while you’re on a path you don’t want to be on. Or if you do find some joy, it won’t be as joy-filled as it could be because you aren’t fully immersed in what you’re doing.

You won’t be fulfilled either because your heart’s not in it. Or even if your heart’s in it a little, it’s still not in it fully. There’s still some inkling of doubt that this isn’t the right path for you. And that inkling of doubt will always be there, like a pebble in your shoe, so no matter how many steps you take, you still feel a bit of discomfort with every one of them.

What I wish someone had told me years ago

You don’t have to keep going with something that doesn’t feel right to you. Even if you spent a lot of time/money/energy/resources/focus/etc. on it. Even if you’ve told lots of people about it or declared it publicly. Even if everyone around you is telling you that they believe this is the path for you.

If your intuition is telling you that it (whatever it is) is not the right thing for you, you need to heed that. The best thing you could ever do for yourself is to trust yourself. Trust that you know what you most want. Trust that you have your own best interests at heart. Trust that what’s deep down inside of you (who you are at the core) would never steer you wrong.

A note on your intuition

Your intuition includes both your mind (what you think and that voice of wisdom inside you) and your body (how it feels and reacts). Most people know about the mind. Most people discount their bodies and what their bodies are trying (often desperately) to tell them.

Your body really is one of your most accurate sources of information about how you truly feel about something. Your body doesn’t do lists of pros and cons. It doesn’t ask your friends/family/coworkers what they think about it. It doesn’t form arguments to talk itself into or out of something. It just reacts, often immediately. Your body really will tell you, likely instantly, if the path you’re on feels right or wrong to you.

Oh, the suffering you will save yourself if you’ll just quit

When you’re heading in a direction you just don’t want to be going, there’s suffering.

It can be mental:

It can also be physical:

Your intuition will tell you. All you’ll need to do is trust yourself (and if you don’t know how: read this) and start taking steps in the direction you actually want to go. And once you do start moving in the direction that’s right for you, you’ll come to find all of that suffering you’ve been experiencing will fade and most likely leave you altogether.

So will you give yourself permission to quit or will you carry on down a path you don’t belong on?

Shelli Johnson is an internationally-recognized expert in the fields of obesity and weight management. Shelli has been featured four times in PEOPLE Half-Their-Size issue, PEOPLE TV, FOX TV, National Public Radio, The Charlotte Observer, among others. Her work has been published in The Plain Dealer, Thrive Global, Authority Magazine, and more. Her books, Start Where You Are Weight Loss® and Start Where You Are Weight Loss® Playbook, were both a #1 Amazon Bestseller. Find out how she can help you eat what you want, lose weight, and keep it off here.

For decades, I was a yo-yo dieter with an eating disorder — weighing over 300 pounds at my heaviest. I have had a weight loss transformation, losing over 160 pounds naturally and maintaining that weight loss for ten years and counting.

I’m an internationally-recognized expert in the fields of obesity and weight management. I’ve been featured four times in PEOPLE Half-Their-Size issue, PEOPLE TV, FOX TV, National Public Radio, The Charlotte Observer, among others. My work has been published in The Plain Dealer, Thrive Global, Authority Magazine, and more. My books, Start Where You Are Weight Loss® and Start Where You Are Weight Loss® Playbook, were both a #1 Amazon Bestseller.

My weight-loss program is built on over a decade of looking at weight loss differently.

I help you make peace with food and make peace with yourself so you can become the person you envision yourself to be. I empower you to create a life that you love and a body that feels like home to you.

Manage Cookie Consent
We use cookies to ensure that we give you the best experience on this website. By continuing to use our site, you agree to our cookie policy.
Manage options Manage services Manage vendors Read more about these purposes
View preferences
{title} {title} {title}
Scroll to Top